A History of the “7331 N. Sheridan Road” Mansion (the “Shambala Meditation Center”) 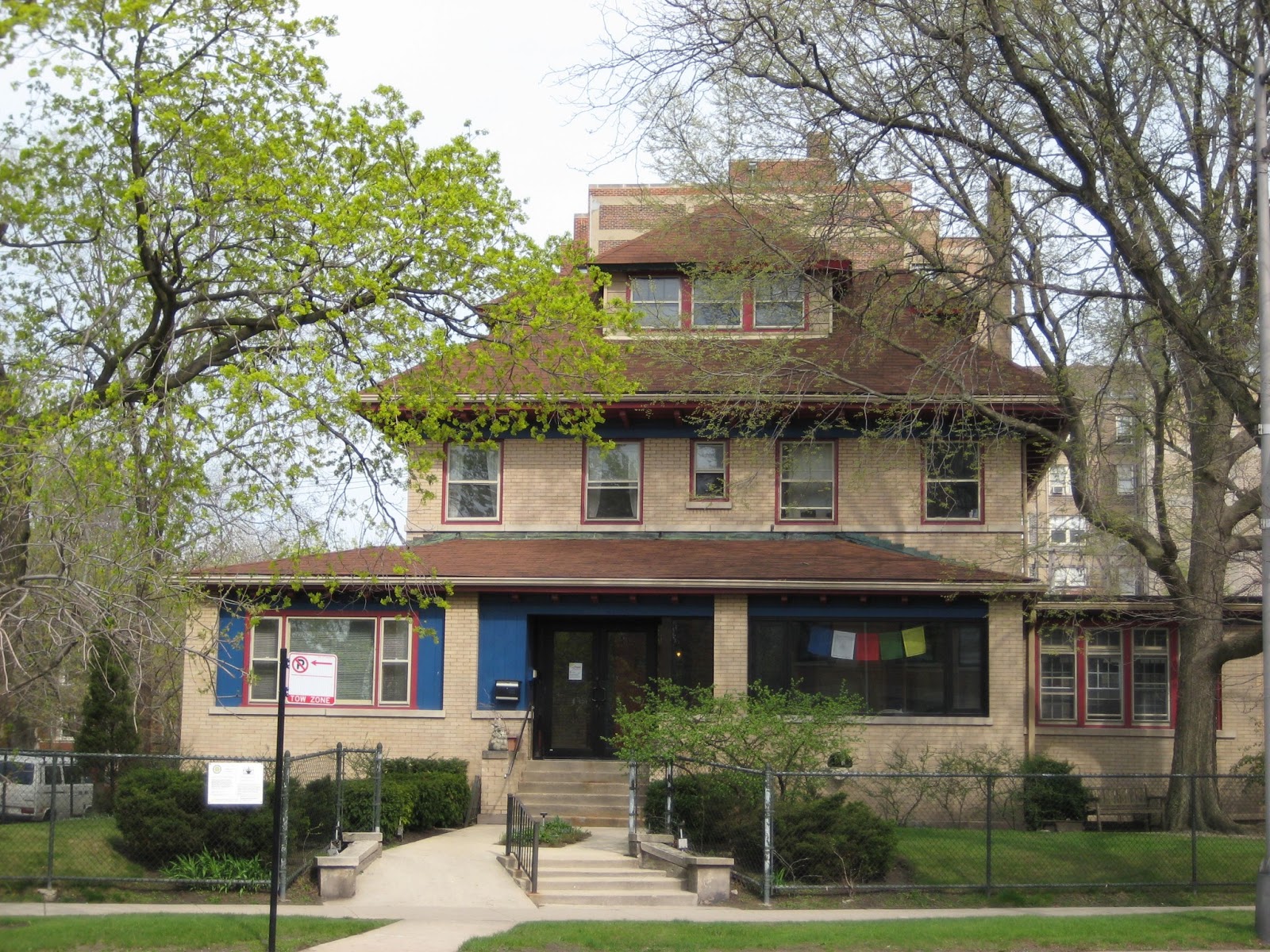 The mansion at 7331 N. Sheridan (currently the Shambala Meditation Center) is a lovely, 95-year old, Prairie-school style home. It is constructed with cream-colored brick and now colorfully-painted, wood trim. This luxury home has large, lush green spaces for its front-yard and side-yards. In addition, the home is surrounded by many large, leafy trees. In fact, this is the last remaining Sheridan Road mansion in Rogers Park south of Jarvis Avenue.
This historic, beautiful home has a unique story and has served several uses over its lifetime which many people remember. So why are we throwing all this away? For an unsightly, 250-car, lakefront parking garage with no setbacks? To be built by a billionaire who claims to be a preservationist and who could readily repurpose this beloved mansion given his other multimillion dollar projects? This makes no sense. More . . .

Like all the mansions on Sheridan Road in Chicago, the residence at 7331 N. Sheridan has a colorful and enlightening history. Truly, one mansion can provide great insight into history. To start with, like many pre-1920 Chicago residences, no building permit is on record for 7331 N. Sheridan, which would list the architect and construction date. By 1914 however, commercial insurance maps show the home where it stands today. Moreover, as early as June 1918, Chicago Tribune articles report about the home’s original long-time residents.
It appears then, that the 7331 N. Sheridan home was constructed about the same time as the nearby 1915 Frank Lloyd Wright-designed “Emil Bach home”. Indeed, the Shambala mansion helps “tell the story” of the Bach house and why a Frank Lloyd Wright house is located here on the Far North Side. The Shambala mansion, two blocks south, was also a part of, and helps illustrate the early 1900s era when this stretch of Sheridan Road was a posh locale like the North Shore is today.

From 1918 through 1936, various Tribune articles refer to the mansion’s primary residents, the Holsman family. According to his 1934 obituary, Mr. Hyman Holsman was a local philanthropist and a jeweler by trade. Initially, Mr. Holsman owned a downtown jewelry store located at 179 W. Madison. Eventually, he owned a store at 5 S. Wabash, otherwise known as the “Jewelers Center” at the Mallers Building. This is one the most famous addresses on the historic “Jewelers Row” in the Loop. “Jeweler’s Row” is a group of buildings which contained many silver and jewelry businesses starting in the early twentieth century. These buildings are now a Chicago Landmark District since 2003.
Mr. Holsman resided in the home with his second wife, Nell, and their three daughters, Hortense, Jeanne and Elizabeth. His first wife passed away in 1911. He had an adult son, George, from this first marriage who did not live there.
Also according to his obituary, Mr. Holsman’s philanthropy included active participation in several important Chicago institutions. He was an early vice-president of the Edgewater Hospital at 5700 N. Ashland founded in 1929. This hospital, now closed, was one of the primary hospitals in the area for many decades. (Hillary Clinton was born there in 1947!)

Mr. Holsman was a founder and treasurer of Temple Mizpah, a synagogue at 1615 W. Morse, which is now the “Mision Cristiana Elim” Church on the southwest corner of Morse and Ashland. Temple Mizpah was one of the early, liberal, “Reform” Jewish congregations in the city. (The other major Rogers Park congregation founded at that time was the “Conservative” synagogue of B’nai Zion at 1447 W. Pratt now the private “Lakeshore Preschool”.)
According to the encyclopedic 1924 book by H.L. Meites, History of the Jews of Chicago, Temple Mizpah was actually organized in 1919 in Mr. Holsman’s home at 7331 N. Sheridan! The synagogue building on Morse was constructed in 1924 to accommodate the congregation of 350 families. Sixty years later in the 1970s, the then smaller congregation relocated to Skokie.

Mr. Holsman was also a director of the Marks Nathan Jewish Home for Orphans. The Marks Nathan Home opened in the Lawndale neighborhood in 1912 during the height of the immigration boom in America. At the beginning of the twentieth century in Chicago, many poor West Side Jewish immigrants fell on hard times, or even perished, and an orphanage was needed.
In its day, this orphanage provided a very good environment for its children, including music and Hebrew lessons as well as symphony and theater excursions. Some of the famous people who lived there as children include Elmer Gertz, the prominent constitutional law attorney, (http://en.wikipedia.org/wiki/Elmer_Gertz) and Barney Ross, the famous Jewish boxer (http://en.wikipedia.org/wiki/Barney_Ross).

One Tribune article also indicated that Mr. Holsman’s son, George, attended the aviation school at the Great Lakes military base during World War I. Finally, in 1936 the Tribune reported that Mr. Holsman’s daughter, Jeanne, eloped and married Philip Weintraub of Chicago. Weintraub was a first basemen for the Cincinnati Reds at the time and later played for the New York Giants. He became a notable baseball player in the 1930s and 40s, a time when few Jewish people had ever played in professional baseball.
Weintraub has several impressive career statistics such as the second most runs batted in (RBI) ever in a game at eleven runs! He first played for the Loyola University baseball team in Rogers Park (http://en.wikipedia.org/wiki/Philip_Weintraub) and(http://www.baseball-reference.com/players/w/weintph01.shtml) (photo included). Additional research is needed regarding the occupants of the home after the 1930s.

By the 1970s, the 7331 N. Sheridan mansion was utilized as a children’s daycare center, the Camelot School, for a decade and many Rogers Parkers remember going there as children. In the 1980s, the building was repurposed as an Illinois Masonic Hospital Women’s Health Center. Thereafter, starting in 1996, the Shambala Buddhist organization developed the popular meditation center that is there today. However, the organization is now relocating to a larger space in the West Loop. At the present time, the building is in great shape, charming inside and out while still operating as the Shambala Center.

Therefore, it is clear that research into one mansion can open doors to the many facets of history in a surprising and wonderful way. This one home sheds light on the formative days of Chicago as a city at the turn of the twentieth century. This was a time when great waves of immigrants settled here and community members organized to establish the city’s first businesses, hospitals, religious institutions, social services, and even sports activities. It would be a horrible shame to lose this gorgeous building that beautifies our landscape and its fascinating history that tells us so much about ourselves.